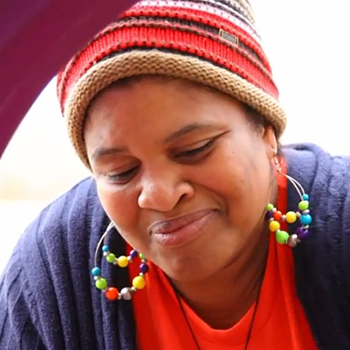 Wanda Cheeks wants to give children the promise of happy memories at the park—memories she never had. When she was 12, she was kidnapped, assaulted and abandoned near Irwin Park in Spartanburg, S.C. She went on to become a teen mom, burdened with adult responsibilities before fully becoming an adult.

Despite—or maybe in part because of—her troubled childhood, she has dedicated her life to making sure that thousands of children in Spartanburg have a safe place to play. Says Wanda, “I believe that playing is the most important action that a child can do.”

In 2003, she founded Southside Unity in the Community (SSUITC), a nonprofit that promotes volunteerism while providing opportunities for at-risk children. Her first mission was to build a new playground. Though she had once vowed never to return to Irwin Park, with guidance from KaBOOM! and funding from The Home Depot Foundation, Wanda ended up leading hundreds of volunteers in the construction of a new playground there.

Wanda says, “Nobody thought they had the power to be a part of change like that. They thought it was always the city job, the school job, the job of the property manager… They realize they have a voice. I see a lot more people getting involved, taking the roles, stepping up. I’m very proud of those people in my community and I love to see them grow.”

And that was just the beginning. Wanda went on to plan another community-wide playground build at Spartanburg Charter School and helped lead substantial renovations to Priscilla Rumley Park. She also campaigned for Spartanburg to achieve Playful City USA status, and because of her tireless efforts, the city has been named a Playful City USA community for six consecutive years.

“I eat, sleep, and drink playgrounds,” Wanda says. “I never thought blisters could make my heart feel so good!”

Wanda has helped bring play to other southern cities, building seven other playgrounds with KaBOOM! in Atlanta, Charlotte, New Orleans, Orlando, and Washington, DC. She is now back in Spartanburg utilizing our DIY tools on Our Dream Playground to help plan the construction of St. Paul Community Park, which will be accessible to children of all ages and abilities, provide recreation for the elderly, and host community and family events.

Through her tireless efforts, Wanda has become a role model in her community, even winning the 2012 Mary L. Thomas Award for Civic Leadership and Community Change. Community leader Susu Johnson says, “Wanda is a force. One of the things I admire about her is that she doesn’t give up. She has had insurmountable odds that she has surmounted.”

It’s not a life course that Wanda expected, but she has learned to embrace it. “Being a menace as a child and thinking that you have no future or mean anything to anybody,” she says, “and then just seeing the whole world at [my] feet saying what do you want to do Wanda? [That’s when] I saw that I was a leader.”

Photo and video provided by The Spartanburg County Foundation.