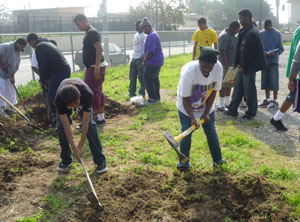 "Late afternoon one day, when I was just six years old, I heard a series of loud cracking noises. Suddenly, my grandmother pushed me and my sister down and threw her body on top of us. When we woke the next day, I learned that a drive by shooting happened the night before.

It was in that moment that I became aware of the reality of poverty and violence in my neighborhood. Although my father was addicted to drugs and never around and my mother struggled to raise my sister and I on clerk’s wages, I was blessed with teachers, family and community members who helped me stay focused on my dreams and efforts to go to college. It wasn't until I visited South Africa in 2001 and saw shanty towns, that I understood where poverty, privilege and power intersect and realized that no one should have to grow up the way I did, or for that matter, the way the South African kids were either.

As I grew older, I came to learn that 31 people in my family were in prison, and just 1 of us was in college - me. I went on to graduate school and decided to return to my community, Inglewood, to teach critical literacy to black male youth at Morningside High School and help them experience what I felt when I went to South Africa. At Morningside, I founded the Black Male Youth Academy where I work with students and community members to use research in order to identify social issues in our community and then find solutions.

Two years ago, they decided to tackle food justice and began an initiative called "100 Seeds of Change" where they are creating 100 urban gardens – community, school and home gardens. Our program got a big lift this March at a KaBOOM! playground build where my BMYA students led the construction of a wonderful new community garden, next to the brand new playground in Inglewood.

That day, we helped move the 20 tons of soil into over 50 garden beds that were then filled with vegetables, fruits, flowers, and plants. There was a stage and 9 benches to transform a once unsavory concrete desert into an outdoor classroom that stood in front of a custom mural. Two picnic tables turned a barren wading pool into a pleasant lunching spot. A storage box was placed near the garden beds for onsite access to tools and supplies and future plans include the building of an 'outdoor kitchen' that will allow for the community to grow, harvest, prepare, and eat in the same space as where they play and gather.

Both myself, and my students left feeling empowered at the end of the day, and I know we’ll be able to do even more now."

Dart was already a leader in his community, and with the help of KaBOOM! he was able to empower even more people.

Play it forward today to help us work with more leaders like Dart.