A chance to heal, a time for fun 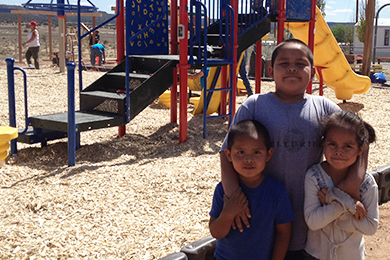 Nearly every member of a community in New Mexico’s Navajo Nation came together to help build a playground not only to improve the lives of the 2,800 children who live there, but also, perhaps, to save them. The town of Thoreau, located about 100 miles west of Albuquerque in the red mesas of northwestern New Mexico, has been coping with a high suicide rate, ranging anywhere from nine to 29 per year—a big portion for a town with a population of less than 2,000.

In addition to the high suicide rate, “unemployment rates are very high, poverty is the norm, and physical isolation is a major problem,” says Trudi Griffin, the principal at St. Bonaventure Indian Mission and School, a private, tuition-free Catholic school in the community. St. Bonaventure reached out to KaBOOM! for help building a place for children to play.

Studies have shown play and physical activity is essential for the overall health, well-being, and happiness of children. According to the most recent issue of the American Journal of Play, “The decline of children’s play time has led to the rise of anxiety, depression, and problems of attention and self-control.” A recent quantitative study from Insight Strategy Group, commissioned by KaBOOM!, with the support of the Mattel Children’s Foundation, reports that parents and children both see play as a way to relax and get rid of stress. And for good reason—sometimes the most important thing to remember about play is its simplest definition: play is fun.

For this struggling community, a playground seemed to be just what the doctor ordered.

To get the process started, St. Bonaventure took the initiative, filling out the application. But local parents also got involved. “Children have no place safe to play during the summer,” and “There is no place for young children to go to stay out of trouble,” parents wrote in letters to KaBOOM!. The final piece of the puzzle was put into place when Blue Cross and Blue Shield of New Mexico (BCBSNM) stepped up to fund the playground, to “help New Mexico stay healthy,” said a rep from BCBSNM on the day the playground was built.

Together, the community, KaBOOM! and BCBSNM assembled the 2,500 square foot playspace that features more than 2,000 ways for kids ages 2–12 to engage both physically and mentally. The site features slides, swings and learning panels, and can accommodate up to 60 kids at once. Parents and other adults can stand in shade cover, sit on benches or gather at picnic tables nearby while kids play—all elements that were built alongside the playground with the help of volunteers from the community.

In June 2013, the playground was ready for action. In addition to a bright new space, the playground signifies something larger to the town. Chris Halter, Executive Director of St. Bonaventure says, “This playground means hope, it means excitement, it means blessing for all these children.”

We hope this playground brings joy to the children and the adults of Thoreau for years to come.